"To teach the Hebraic perspective of faith in and obedience to the One True Elohim."

The Road of a Foreigner

The year 1986 was one of much turmoil in my life. I was 28 years old and very confused about life. It was during this very humbling time that I remembered the teaching of my youth and looked to G-d, asking Him if there was anything He could do to take my broken life and turn it into something of good. The restoration in my life began, literally, that very day. It was then I decided that I needed to learn more about this G-d and His instructions to me. I picked up a Bible and began in Genesis, reading with incredible hunger.

It was somewhere in the first books (I would later learn as the Torah) that, one night, I found myself simply staring at the words on the pages. Deep within my spirit, a revelation was springing forth. I set my Bible on the table in front of me and began to weep. I called my wife to come to the room and said to her, “I now know this Book to be true!” She looked in wonder at me as I repeated my statement and then told her why. “I know this Book to be true because the Jews are still alive, and there is a State of Israel. Only G-d could make that miracle happen.”

This revelation began a new journey for my life. Within a couple of years, I found myself as owner of a carpet cleaning company in Tucson AZ. One of my largest accounts was a property management company owned by two Jewish men. Another was a large apartment complex across the street from the Synagogue. My favorite days were those that I was scheduled to clean the carpets of these Jewish homes. Most of the people were much older than I; and they, for some reason, treated me like a long-lost grandson. I was intrigued by their very presence and knew not why.

Years would go by. I continued to study Scripture. I became fascinated with such things as the Feasts and the Tabernacle, the customs, and the traditions of the Jewish people. My study would lead me to become a pastor of a church in North Florida. It was there that the puzzle pieces would begin to make sense.

The opportunity arose for me to come to Israel in 1998 for a pastor’s familiarization trip. It was not to be like most tours. We did not go to Catholic churches and places that had nothing to do with Scripture; but, rather, we saw Scripture opened before our eyes. I remember weeping many times throughout my trip. It seemed crazy to me, but it was like I had come home.

I went back to my church and challenged the people regarding Israel and the Jewish people. I taught them that, as long as I was pastor, we would focus on the following three things:

I must tell you that most of the people in that church could not have pointed to where Israel was on a map, and not a single one of us knew a Jewish person. To make matters worse, we were in a very poor community, and none of us had any extra money. However, none of that was going to stop us with the above task. We began that Sunday with our first prayer for the peace of Jerusalem.

It was then that Scripture began to come alive. I was hooked on the wonders of its pages and the new truths I was seeing. I was also hooked on the Land and the people of the Land.

Many things were happening in my life during those days of 1998 and 1999. I looked at the verses of Jeremiah 16:19-21. I found myself in those verses. I came to realize that I had been taught many lies by well-meaning people who had simply passed on lies that traced all the way back to Constantine in the fourth century. My study would bring me to the realization that the seventh day was still the seventh day. Shabbat had never changed since creation itself. Shabbat was, is, and would always be on the seventh day. To further complicate my life, I contemplated that Shabbat even began before there was a nation or a people called Israel. Sunday would become a day of work and Shabbat, a special gift. I saw that G-d had created creatures upon the earth with special purposes. Pigs, shrimp, and crabs had never been created to eat, but to clean the earth and sea of waste. This was especially hard to accept as I had grown up in the southern region of the U.S., a place where pork and shellfish were staples of life. My diet changed! During those days, I also jumped at any chance to take a trip to Israel.

1999 was coming to an end. It was becoming clear that it was time for me to resign as pastor of the church and go wherever a door was opened to teach the wonders I had and was learning. It would be a time of on-the-job training as I traveled across the U.S. and to other countries as far away as New Zealand, Japan, and South Africa. Every place I went, I challenged each group of people in the same way I had challenged my church after my first trip to Israel.

Along my journey, people would ask what I called myself. Because of my study and time in such places as the Holocaust Museum and a tour of Berlin, the name Christian was becoming harder and harder for me to deal with. I was appalled at the acts that have been done in the name of Christianity. Martin Luther, the “Church Fathers,” and others could never have done what they had done or believed what they believed if they had seen the Bible through the eyes I was seeing it through.

Life had brought me to a fork in the road. Was I to give up everything I had ever been taught and convert to Judaism? I pondered this. I was not against Judaism. In fact, I had learned much from my studies of rabbinic sources; but was that the answer for me? Was I part of the ten tribes that had been dispersed and assimilated so many centuries earlier? What was I to do? It was then that an Orthodox Jewish man directed me to the prophecy of Isaiah 56, specifically verse 6. There I was! I had found myself! I was not - as some had accused me of - trying to replace Israel. I was not to become Jewish. Who I had become was as old as the Torah itself. I was the foreigner who desired to be Joined to HaShem to serve Him, love Him, and be His worker. I was not replacing His family, but rather enlarging it. He had called me to be part of His family so many years ago. I would be as the one Isaiah would go on to prophesy about in chapter 63, one that Abraham would not recognize and Israel would not acknowledge. No matter. He had become my father. This in itself would be another concept hard to grasp as I had grown up without a father in the house.

It is now many years from that first trip to Israel. I am writing from a house located in the Hills of Samaria. It is my eighteenth trip to Israel.(2011) I have brought many people to this land, even during the time of the Intifada of 2000 to 2003. Through my times here, I have had experiences too many to mention. I have witnessed the atrocities first hand that have been done to this land and to the people of the land. I have seen with my own eyes the charred remains of a bombed café in Jerusalem, the broken glass of a pizzeria, and the blood on the wall of the French Hill bus stop. I have wept with and over friends who have been injured by suicide bombings. I have stood in prayer at the Western Wall, crying out with my Jewish brothers and sisters that the people of Gush Katif would not be driven from their homes. I have, and continue to see, the birth pangs of prophecy being fulfilled right before my eyes as I looked yesterday upon the empty home of the Fogel family in the “Settlement” of Itamar.

So where does my journey take me from here? That is a question I cannot nor would I desire to answer. To have the answer today may cause me to consider shrinking back from the path ahead. I have seen HaShem direct my path from that special day in 1986 and have no doubt He will continue to do so in the days to come. Where He directs my feet to walk is His business, not mine. My decision today is that no matter where my feet stand, I stand for Him, for His land, for His people, and for His Word. If I am misunderstood, persecuted, or worse, my course is set. My decision, I pray, is firm and unshakeable. I continue to walk in the responsibilities I have taught since my first trip to Israel. My prayer is words I have come to know as the foreigners prayer, the words of Isaiah 63:15 – 64:1, words of restoration. With these words, I cling to One I now know as Father, the G-d of Abraham, Isaac, and Jacob.

Be strong and let us all be strengthened together, 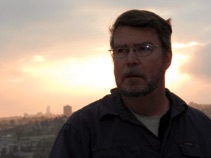